Puri-the land of temples and divinity has been the prime pilgrimage because of the world famous Jagannath Puri Temple. World-famous Puri temple is a home to Bhagwan Jagannath or Lord of the Universe. However, there are also a number of other temples in Puri that are visited by people to pay homage to their gods and goddesses. Talking about the temples inside Puri, there are a number of famous temples like Jagannath Puri temple in Puri, Gundicha Temple Puri, Pancha Tirtha temple Puri, Loknath Temple Puri, and the list goes on. Before you come to visit temples in Puri, go through the details of temples and other attractions in Puri.


Jagannath Puri-Abode of Lord Jagannath (Lord of the Universe) 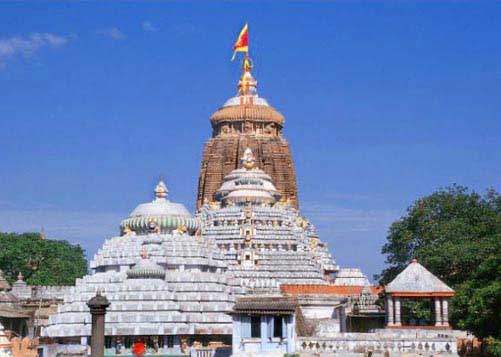 It is the temple of temples in the holy and the most sacred city of Puri in Odisha. Being an abode to Bhagwan Jagannath or Lord of the Universe, the temple belongs to the 11th century that has been getting honour from devotees from all parts of the world. It is also one of the 'Char Dhams' and every Hindu Devotee has a dream to visit the holy temple in Puri at least once in his/her life. The holy sight of Lord Jagannath, convoyed by Subhadra and Balabhadra increasestons of happiness among the aficionados. The two gods and the goddess of the temple are adorned with heavy jewellery and clothing according to the events and seasonal change. The temple has been designed in the Pyramid Shape. According to Hindu Mythologies, It is supposed that in the Krita Yuga, the genuine image of the lord had the power of yielding 'Moksha' or devotion to anyone who perceived it.

In the further story, it is said that the God of the Death or Yamaraj didn't find this justice full and decided to keep the image in some distant at an unknown of the earth. The time passed and the Dwapar Yuga, the idol was worshipped in Jagannath Puri. Still the tradition is in full swing and people worship Lord Jagannath for Moksha. In Jagannath Puri, idol was constructed by Lord Vishnu with the help of wooden logs. Jagannath Temple in Odisha (Orissa) entails four entrance gates that are called as Singhadwara, Ashwadwara, Hathidwara and Vyaghradwara. All four names refer to lion, horse, elephant and tiger. Each day, the Lord at the Jagannath Temple is obtainable 'bhoga' six times and it is distributed among the worshippers close to Ratnavedi. Come to visit the temple in Puri and you will get the best accommodation in Toshali Resort very close to Puri Beach. 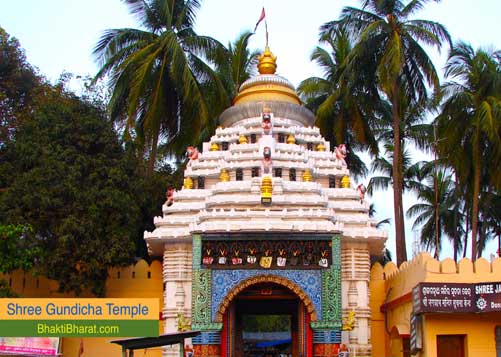 The greatestsignificantasylum of the Lord Jagannath is the Gundicha Temple. Being an abode to Jagannath, Balabhadra and Subhadra, it is also another must see temple inside Puri. The temple is looked after by saints and monks or Pujaaris. The famous temple is located at the other end of the great highway (Badadanda). According to records, 2688.0696 meters or 8327 feet is the total distance between Gundicha temple and Jagannath Puri Temple. The holy place or the famous temple is encircled by a wall and viewpoints in the middle of garden. It contains four parts connected with kitchen rooms, by a slenderpassageway. In addition, the tower is a construction of Pidha type that is 75 feet high with a base of 55 feet by 46 feet outside along with 36 feet 8inches by 27 feet privileged. Four structures named Vimana, Jagamohan, Natamandap, and Bhogamandap stand the smidgens of numeroussurfacing and are imprinted in places with indecent figures in mortar.

The temple is in the form of water tanks that is the point for five sacred water sources. The sacred tanks are known as Indradyumna (Near the Gundicha Temple), Manikarnika (In the Marnikarnika Street), Markanda (Towards the north of the Jagannath Temple) and Swetaganga (Towards the south of the Jagannath Temple). These main Tirthas or sacred waters in combination with the sea make the Panchtirtha or five sacred waters in which pilgrims are sombrely enjoined to take bath. Certain of these places and few other places include Lokanath temple, Atharnala Bridge, and the list goes on.

It is one of the famous temples in Puri that is known for Siva temple of Puri only a Kilometer away from the Jagannath Temple, near the western end. There is a prevalentacceptance that Lord Ram had mounted this lingam with a Lauka or Pumpkin. The Temple was built during 10th-11th century A.D. in which devotees come here to see Lord Loknath to be healed from any kind of illness. Moreover, different types of certain festivals are observed in the temple. Saranti-Somobar-melais the important one from all the main festivals and fairs.

It is in the northern Side of Sunar-Gauranga temple. In Chakranarayan Temple, image of Lakshmi-Narasimha is worshipped by devotees from all across the country. Tourists see the amazing idol here that is second to none.

It is very close to Chakranarayan Temple at the distance of 30 meters only. Daria Mahavir temple is also known as Bedi Hanuman. It is also one of the ancient temples in Puri Odisha.

The famous Temple of Puri is on the way to Gundicha temple. Ardhasani is a small temple dedicated to the goddess of that name as she is known as Mausi Maa of Lord Jagannath.

It is in the west of Gundicha Temple in Puri at the distance of about half a mile. Siddha Mahavir Temple is a small temple loyal to Siddha Hanuman. It is believed that saint and poet Mahakavi Tulasidas resided at this place during his stay at Puri.

Jameswara temple is also an ancient temple that has its base from 11th Century A.D. The beautiful temple is on the last of Harichandi Street in which Jameswara Siva is worshipped that protect the holy land from the impact of Yama. It is known as Yamanaka Tirtha.

Alabukeswara temple is a Saiva shrine situated to the west of the Yameswara. It is spoken of in high rapports by the Kapila Samhita for making barren women fruitful.

It is a small Saiva temple in the abruptvicinity of the Alabukeswara in the Manikarnika Sahi. The sacred pool of Manikarnika is also located here that has some religious significance.

Located in the south-eastern side of Lord Jagannath Temple on Balisahi, Daksinakali Temple is also an ancient temple. The beautiful templein Puri is fronting to east and comprises of a Vimana and a Jagamohana. In the temple, the idol of goddess is worshiped. According to the evidences, the deity is four-armed and seated on a carcase while she is shown as drinking blood with a blade along with holding detached head in two of her hands. It is alleged that Daksinakalika is the godparent of the kitchen of the Lord Jagannath Temple.

It is also one of the famous places or shrines in Odisha in old palace of Gajapati Kings of Puri. The historical royal palace is located on the Grand Truck Road of Puri.The temple is a new place as the old palace was there in Bali Sahi. You can reach there from the Southern door of the Lord Jagannath Temple.

It is a ruined temple of Vishnu near the Gundicha temple. According to the ancient records, it is the place of Kabi Jayadeve who is the author of Gitagovindam. The famous poet wrote Dasavatara Strotra in his famous work Gita Govindam after getting inspiration from the 10 incarnations of Vishnu.

The Temple of Seven Mother Goddesses

Temple of Seven Mother Goddesses is located on the ridge of a big sacred pond--Markandeya Soravara. The famous temple in Puri reminds of the comparable temple build at Dasasvamedha Ghat of Yajpur built in the 10th century by the Somavamsi Kings. Brahmi, Maheswari, Andri, Kaumari, Vaisnavi, Varahi and Camanda are known as the seven mother Goddesses worshipped in the famous temple of Puri

According to traditions, all the three Chariots or Raths of Lord Jagannath, Balabhadra and Subhadra twitch from the Singha Dwara of the Temple of Jagannath and touch the Gundicha Templeat Bada Danda. Mausima temple is between the Gundicha Temple and Singha Dwara. Ardhamsini or Ardhasini, popularly known as Mousima (aunt) of Jagannath is worshipped here. During the Rath Yatra, the Lord takes a bhoga of 'Podapitha", a special cake here. According to Skanda Purana and Vaisanava Knadha, it is said that for the duration of inundation, when the sea over flooded SPuri, this goddess drank half of the flood water and saved the town.

Chhatia Bata is renowned for saint Hadi Das. The temple has an interesting story connected with the famous and ancient Banyan tree that is called as Chhatiabata. The cumbersome of the renowned saint Hadi Das is still here that issurrounded by its enclosure bounded by walls.