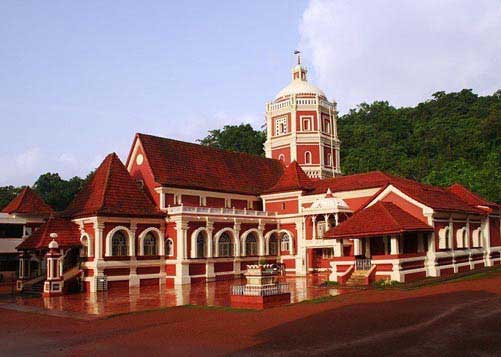 Goa religious places are world-famous and people from across the world come here to see the elegance of famous churches in Goa as well as renowned temples of Goa. The long list of name of churches in Goa consists of Se Cathedral (the seat of the Archbishop of Goa), the Church of St. Francis of Assisi and the Church of S. Caetano, among others. Moreover, the Basilica of Bom Jesus, which bears the relics of Saint Francis Xavier, is also a famous church in Goa. Apart from Goa Churches, there are several other Goan religious places, including temples, of tourist interest.

This is a catholic church in Goa wherein lays the tomb of St. Francis Xavier who was a well known and important missionary in India. The structure of the church is made of marble and the church is ornamented with precious stones as well as paintings delineating the life of the saint. A very significant aspect of this church is that the church contains the St. Francis's mortal remains.

This temple can be spotted at 33 Km distance from Panjim. The deity of this temple is goddess Shantdurga. The temple appears to be surrounded by coconut trees, flower gardens as well as paddy fields. The temple is a typical Goan temple and is amazing to behold.

This seminar can be spotted 7 km distance from the Margao town that lies in Salcete Taluka. Close to this seminary, there lies a church in the honor of Saint Ignatius Loyota. The church also contains Saint Constantine's statue as well as his some of his blood and bones. The seminary was a place where a very old printing press was placed in the year 1616 in order to bring up Christian religious literature.

This masjid is the most renowned masjid among the 27 masjids situated in Ponda taluka. The foundation of this masjid was laid by Ibrahim Adilshan of Bijapur. In the proximity of this mosque, you can spot a masonry tank consisting of small rooms. Initially, there existed beautiful gardens around the mosque. But during Portuguese rule, they got removed.

This temple can be spotted at the Ponda taluka of Goa. Close to this temple, you find paddy fields, jackfruit groves, lush green surroundings as well as coconut palms.

Our Lady of immaculate Conception church

Mahalsa Temple lies at Mardol in Goa. The deity worshipped at this temple is Lord Vishnu in his Mohini form. This kind of incarnation was adopted by Lord Vishnu at the time when the 'devtas' and daemons were at loggerheads with each other. The temple belongs to the 17th century. As one enters in this temple, one comes across the Sabha Mandap and inside the temple, you find amazing wooden carvings. People also regard this form of Lord Vishnu as Narayani.

This is a huge church that was built in the honor of St. Catherine. Its edifice is quite old and it has been recognized as a significant heritage site by UNESCO. The entire construction of the building of this church took eighty years. Various miracles and magical events have been associated with this church and have been witnessed by the people. The cross of Christ appears to be growing in size.

This temple can be spotted in Kurdi and lies in the vicinity of River Salaulim. The temple was rebuilt at this place in order to prevent it from submerging into the dam water. Its construction is done in basalt and laterite stone. There exists a garbhagriha consisting of three doorways. The residing deity of this temple is Lord Shiva and therefore, the shiv linga of Lord Shiva is worshipped here. Its architecture is the bewitching Yadava style of architecture and the walls of this temple are finely carved.

This temple can be spotted at 7 Km distance from Valpoi. In India, there are not many Brahma temples and this temple is the single temple of Lord Brahma in Goa. The temple belongs to the 5th century A.D and is an important religious site of Hindus. The idol of the lord was actually Satari taluka by a large number of religious devotees.


Other Information of Goa

Things to Do Goa