Places to Visit in Shimla 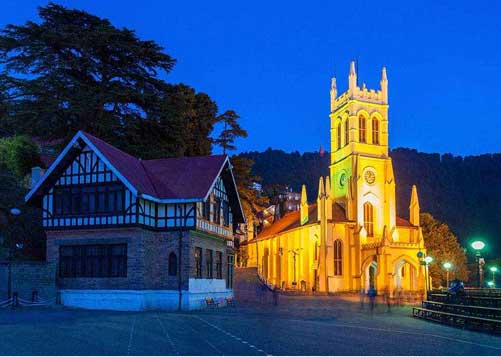 The Shimla Mall : Your Shimla tour is considered as incomplete without visiting the beautiful place. Commonly called as the heart of the hill station, it is a broad area ranging from the Telegraph office to Cambermere Ridge. You will find a number of hotels, restaurants, shops, cafeterias, handicraft showrooms, entertainment center and many more. From this beautiful and must see tourist attraction in Shimla, you will see the distant peaks. The vivacity theatre - a center for cultural activities, is also here to entertain you.

It is also another major tourist attraction in & around Shimla to visit. It was built in Neo-Gothic style in the year of 1904. Earlier it was a secretariat building of the Imperial Government. Now, it is the Department of the Accountant General.

It is also another major tourist attraction the Queen of Hill Stations Shimla. Lies on the Kufri Road at the distance of 13 km from the city center, Wild Flower Hall is spread in an area of 22 Hacters on an altitude of 2593 meter above sea level. What attracts tourists more at this beautiful place is the cool shadow of pines. In addition, you will also visit Shimla City, Peer Panjalrange, THeBadri Peak, etc. from this amazing tourist place.

Being a beautiful railway station on Shimla-Kalka Rail Route, Summer Hill is located at an altitude of 1983 meter in the suburbs. The beautiful place is also known for Georgian style house of Princess Amrita Kaur where Gandhi Ji also stayed during their visit to Shimla. Himachal University is another major attraction at Summer Hill.

Located at an altitude of 1586 meter, the beautiful fall looks amazing and more beautiful during monsoon. It is a must see place in & around Shimla. During your Shimla tour come to explore the beautiful city.

It is one of the must-see places in & around Shimla during your Himachal tour. In this ancient museum, you will see a large collection of Pahari Miniatures, stone made sculptures that have been collected from the temples, textiles, local handicrafts, and embroidery and miniature paintings (PahariBasoli and Kangra style).

Being a residency of Viceroy Lord Dufferin at Masobra on at altitude of 1983 meter above sea level, The Retreat is known for its architecture. It was built in 1884-88 after the plan of Captain H H Cole in Elizabethan Style. It is shaded with pines; while ceiling was made of Burma Teak. Later the beautiful place in & around Shimla has become the summer resort for Indian President. The beautiful scenery, pine forest ranges, steep hills and a panoramic view of snow-capped mountain ranges make it an ideal destination to visit during your Shimla tours. It has also another historical significance as in the year of 1947 the place witnessed an agreement sign between British and PanditJawaharLal Nehru.

In & around Shimla, it is another landmark to visit. It is famous for magnificent English Renaissance structure along with spacious lawn, wooded grooves and panoramic view. It is also famous for having premier institute of higher studies.

One side covered by the mighty hills; while another by pine and deodar forest ranges, Annandale has something magical charm that makes it an idea place to visit in & around Shimla. It is in the east of Glen on the lower parts of the city at the distance of 4.5 km from the city centre. It got its name after the first arrival of British Lady Anna. Earlier, it was a Durand Football Ground as well as a sports complex. Now, there are a number of entertainment options for evening stroll at this beautiful place.

It is another wonderful place to visit in & around Shimla at the distance of 4 km from Annandale.

One of the picturesque places to visit and to enjoy picnic at the distance of 4 km from city centre, Glen is located at an altitude of 1830 meter above sea level. The ways that passes through the dense Maining Oak, Deodar, Pine and other types of trees and forest ranges add more spark in the beauty of Glen and make it a must see place in & around Shimla.

Located at an altitude of 2279 meter above sea level at the distance of 3 km from Masobra, Craignanor is one of the picturesque locations and amusement park in & around Shimla. Here you will see Oak and Pine forests that attract tourists towards the beautiful place.

Located on National Highway 22 at the distance of 8 km in the East, is a must see place in & around Shimla. It is famous for serenity, cool climate; while the 9 hole golf course make it an idea destination to visit in & around Shimla.